The aim was to play a game using Blitzkrieg Commander set on the early Eastern Front. I was tempted to try and convert the Crossfire Stalingrad scenario, but would need to test it first. So I settled on the Battle of Kamenewo which I found on the BKC website. Researching the battle provided the necessary inspiration to overcome the rather rough notes and after a bit of searching I found a simple online tool to produce a map. 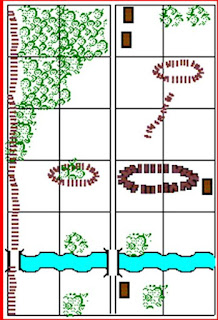 The game was 2,500 points a side. The start sees a Soviet rearguard trying to stop the 4th Panzer Division as it makes its push towards Moscow in early October 1941. The rearguard know that help is on the way with the 4th Tank Brigade heading towards the front to ambush the Germans.

The Germans sent the 35th Panzer Regiment across first, but it took time to deploy. The going was slow but as the Soviet rearguard forces were revealed they were taken out one by one. As they were entrenched this was hard work, but the Germans had the numbers and eventually threw the 6s.

By the time the Germans were across the Soviet tanks had begun coming down the highway. The Germans Pz IIIs headed out to stop the BT7s while the rest of the 35th and the 34th motorcycle battalion raced to deploy on the hills. When the Soviet T34s arrived the German tanks tried to pull back, but couldn't find reverse and so it was stay and fight. There was no Russian ambush and in the head to head fighting the Germans would mass against one of the Russians, normally knocking it out while the Russians would generally go for suppressing as many of the German tanks as they could.

The German 105s had been lost to accurate Russian mortar fire early on, but they now had their 88 deployed and with its long range and power started to knock out the BT7s with each shot and that helped the hard pressed Pz IIIs.

The game played well, with only mortars seeming too powerful (we since found they should have required 6s to hit fully enclosed armour) and wrecks, while looking great, were not blocking line of sight. This last point is an interesting issue as in the scale I was imagining (one model representing around a company) it wouldn't factor, but with a 1:1 scale it most definitely would.

It would have helped to have hidden movement and an advantage for the Russians to be able to move through the forest and flank the Germans as they did in the real battle. 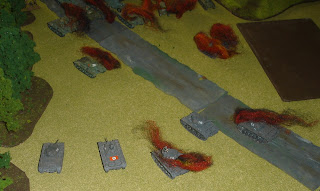 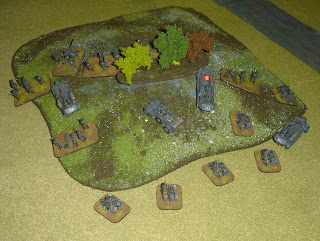 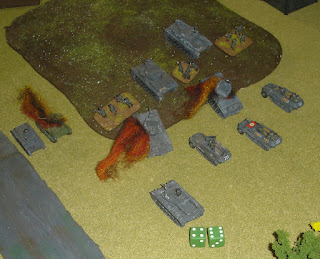 The pictures are from the end of the game.  All figures, models and terrain are from Richard’s collection.
Posted by Sun of York at 11:42 AM