25 May
After finding an Allied Task Force in Candia Bay the Luftwaffe make a poorly coordinated attack but still manage to sink the DD Kelvin.

The Germans air land more troops at Maleme.  They also finally capture the Retimo airfield as the Allies start to retreat.

In the afternoon the Luftwaffe make another determined effort against the Royal Navy and catch Task Force A returning to base low on ammunition.  They sink the DDs Greythorn and Griffin and damage DD Vendetta.

The Germans air land troops at Heraklion.  The Allied retreat is going well as their rearguard puts up a tenacious defence.

26 May
The Retimo sector has now been vacated and troops are evacuating at Sfakia and Tymbakion.  A devastating attack by the Luftwaffe at Sfakia sinks the CL Dido and DD Kimberly and damages the CL Ajax.  The afternoon sees the Royal Navy move back out to sea, but the Luftwaffe continue their success and sink the Ajax and damage the DD Janus.

During the night the Allies complete their evacuation.

27 May
The convoys ferrying survivors to Alexandria are attacked mercilessly.  The DDs Imperial and Isis are sunk and the DD Janus, Kingston, CL Abele and Carlisle all damaged.  The Luftwaffe return for the kill in the afternoon, but are largely driven off by allied naval AA.  The transport Glenroy is damaged however.


Only eighteen Allied units escaped.  Sixteen ships had been sunk.  However, the German losses amongst their elite paratroops were very heavy.  The final victory points came in as 215 to 327 which gives the Germans a substantive victory.


Summary
An excellent simulation and a good game well suited to solitaire play.  While not complex, I did make a few mistakes, but nothing that couldn’t be accounted for by die rolls.  I could have handled the German land attacks better and also the Royal Navy.  I was satisfied using the Luftwaffe for interdiction on land and sea, while it requires good luck, there is no risk to the Luftwaffe so it gets to keep on attacking and eventually it will get through. 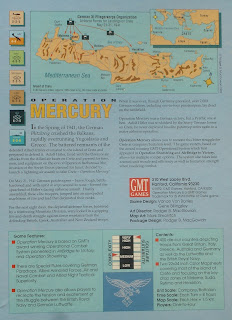