Last night I umpired a game of Sails of Glory between Mark B commanding the British HMS Vanguard and HMS Trepsichore (or HMS Meleager, I can't remember, these English frigates all look the same) and James from the ANF commanding the French Genereux and Courageuse.  My models with terrain by the NWS.

As can be seen I have rebased my ships and I'm halfway through painting the masts and yards.  I also intend to reflag then.  While the SoG base was practical it was not aesthetic and did not look good in photos.  Without a bit of detailing the models also tend to look a little like something you might find in a Kinda Surprise.  But they are an excellent source of boats and it is great to have something that is ready to go straight out of the box.

It was Jame's first game of SoG and a step up from his previous command of a longboat in the Battle of San Domingo.  Mark B has some SoG experience, but as we shall see he might have been a tad tired, hence my title for this post. 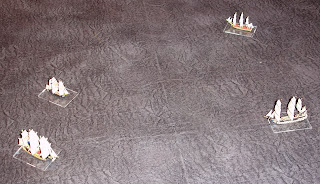 French on the right, British on the left with the wind coming down from the top. 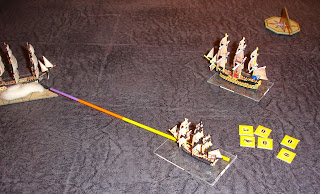 The Genereux rakes the bow of the British frigate, but does very little damage. 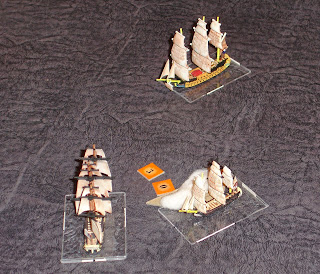 The British frigate has a go back, but also does little damage. 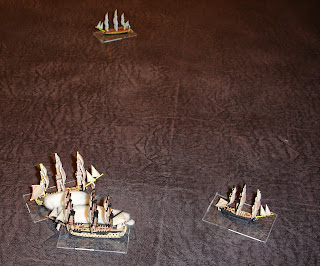 The French frigate has sailed off, leaving the Genereux and HMS Vanguard to batter it out.  They had almost collided, but as the umpire I decided they had just missed, otherwise there would have been a risk of entanglement and sails would have been struck forcing them to get underway from scratch. 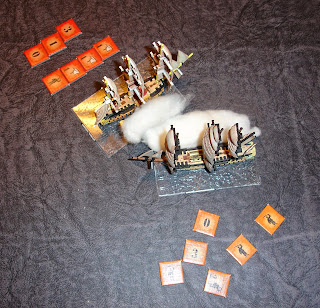 True to history the French ship went for the rigging with a broadside of chain shot.  Also true to form the British blasted the French crew to bits. 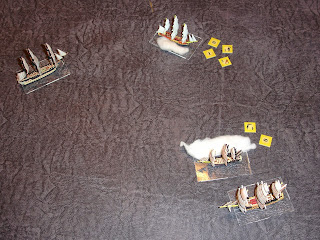 A bit more sailing around and then the two frigates had at each other.  The Frenchman catches fire while the Englishman springs a leak. 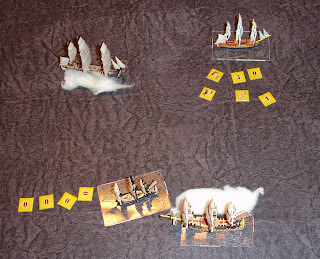 Then the big boys have a go.  Poor Genereux is unable to score a hit, while HMS Vanguard puts a hole in the French frigate.  The glow in the water around the British frigate is a reflection of its charmed life. 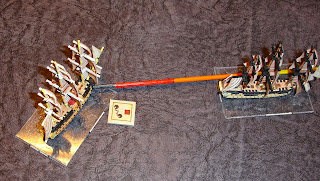 And then it goes to pot (not sure what the British nautical expression is, but I am sure it would be rude).  For some reason the English Captain has decided to try the French tactic of using chain shot, not fully appreciating the limited range and wasting a perfect stern rake. 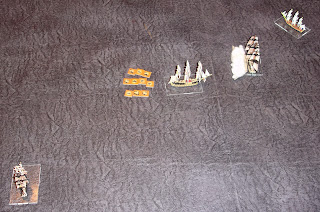 Equally confounding, the British frigate sailed to port rather than starboard.
The Genereux, after its lucky escape, turns and rakes the bow of the HMS Vanguard, doing significant damage including two leaks. 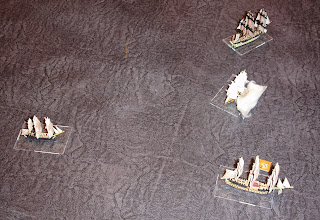 The French frigate fires on the HMS Vanguard which is busy undergoing repairs with all hands to the pumps. 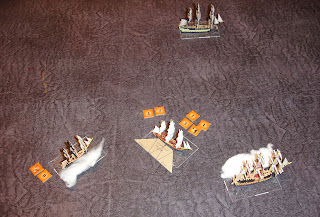 The Genereux looks on as its companion is destroyed in the final firing of the encounter which leaves both British ships with significant damage.  The Genereux heads for home and the British ships wearily limp off to get repaired.

We were using a simplified process for repairs that saw them completed at the end of a turn.  This was borrowed from Bruce W who provided me with his in house rules.  Bruce has been running a play by email Wings of Glory game and we had a few exchanges about Sails of Glory and he very kindly provided me with his in house rules and turn summary.  Very handy.

This game came hard on the heals of the Signal Close Action game.

While there are things I really like about SoG, I think there is a good bit of chrome and some of the play aids were more of a nuisance.  The order chits are fiddly.  The difference in movement due to sail setting and even wind direction is small given the base length movement (the same applies in Wings of Glory, but is not so noticeable).  The variation in distance is almost equal to the aberration caused by handling, bumping and touching of the models during play.  The damage chits, while fun, were also a bit time consuming as the right chit bag was fumbled for and then adding to the fun of packing the game up.

SoG is good for game on a club night, but I think it could be made easier.  Regardless I like how my models are turning out.  In the pictures only the Genereux has had its masts and yards fully painted.  Except for the French frigate all have had a wash over the sails.

Email ThisBlogThis!Share to TwitterShare to FacebookShare to Pinterest
Labels: Sails of Glory