Last Saturday Stephen and I traveled beyond York (no relation) to join the ANF to try out a game of Signal Close Action using Sails of Glory miniatures.  Our target was to see if the rules and boats could do a decent recreation of the Battle of San Domingo in 1806.  This is the start of the quest to find the perfect set of Napoleonic naval rules.

As always this AAR is one-sided in that I mainly only report my involvement in a game.  A less biased report will be found on the ANF's blog in the fullness of time.

We started around 10:30 and finished around 11:30.  That of course was am and pm respectively.  I did say we were new to the rules, there was also lots of chatting etc.  I was the French second in command, left in command, while the dear admiral, played by James, was in town on, eh, business.  The British were played by Stephen and Mark.  Julian, who provided the bulk of the models and terrain was the umpire.

The five French ships at anchor, from left to right they are the Imperial (120), Alexandre (80), Diomede (74), Jupiter (74) and Brave (74).  All the French ships were average.  The seven British ships seemed to be good if not elite although there was a poor one amongst them I think.

For the first nine turns the French tried to weigh anchor.  The admiral was in his rowboat coming back to the Imperial (furthest ship from the town as luck would have it).  The Captains of the Imperial and Brave decided to wait instructions (i.e. failed their initiative rolls).  The other ships started to weigh anchor, but in the strong wind it was an extended task. 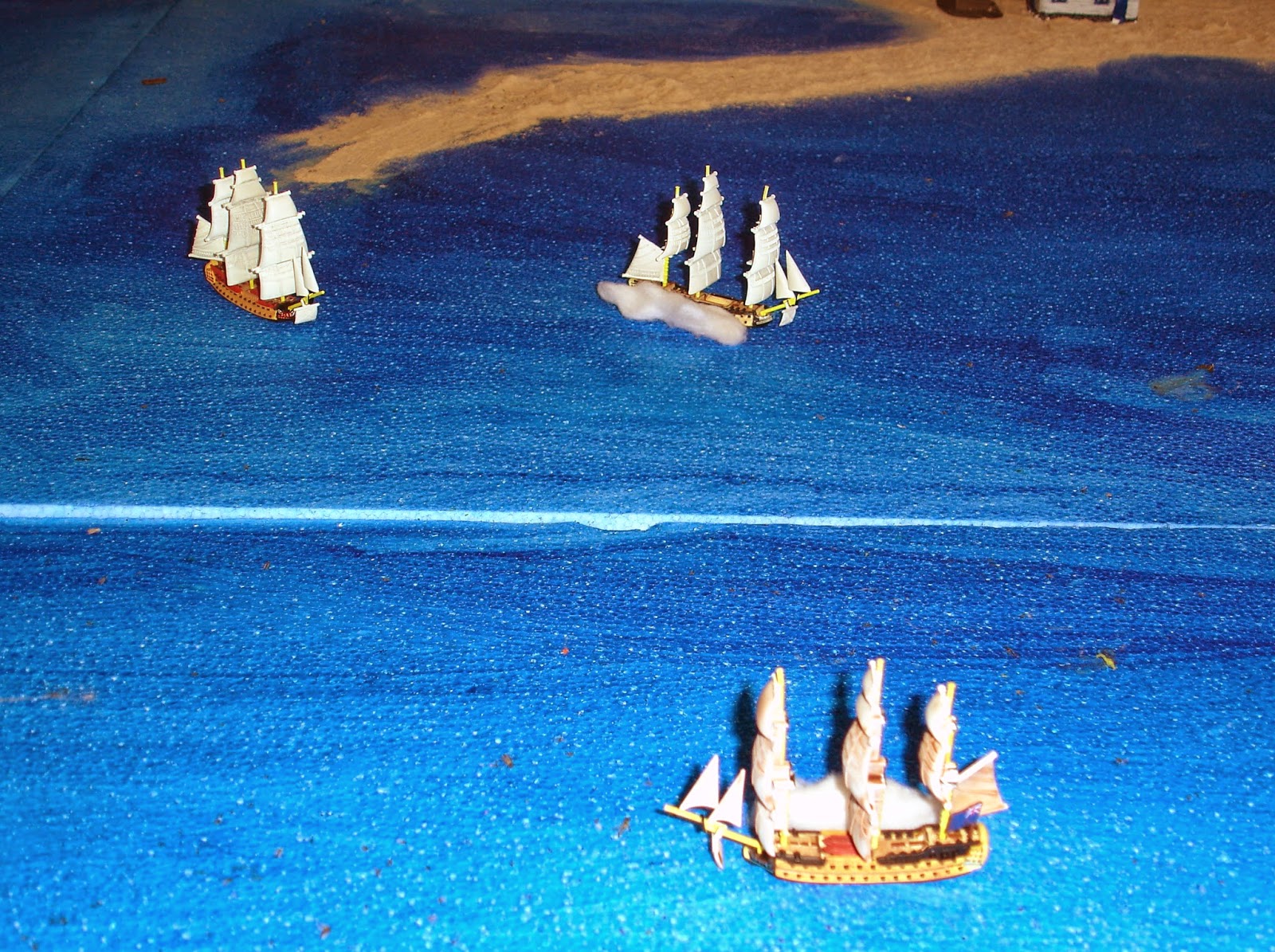 Turn ten and the lead British ship engages the Brave in long range fire.  I calculate it is going to be a long battle. 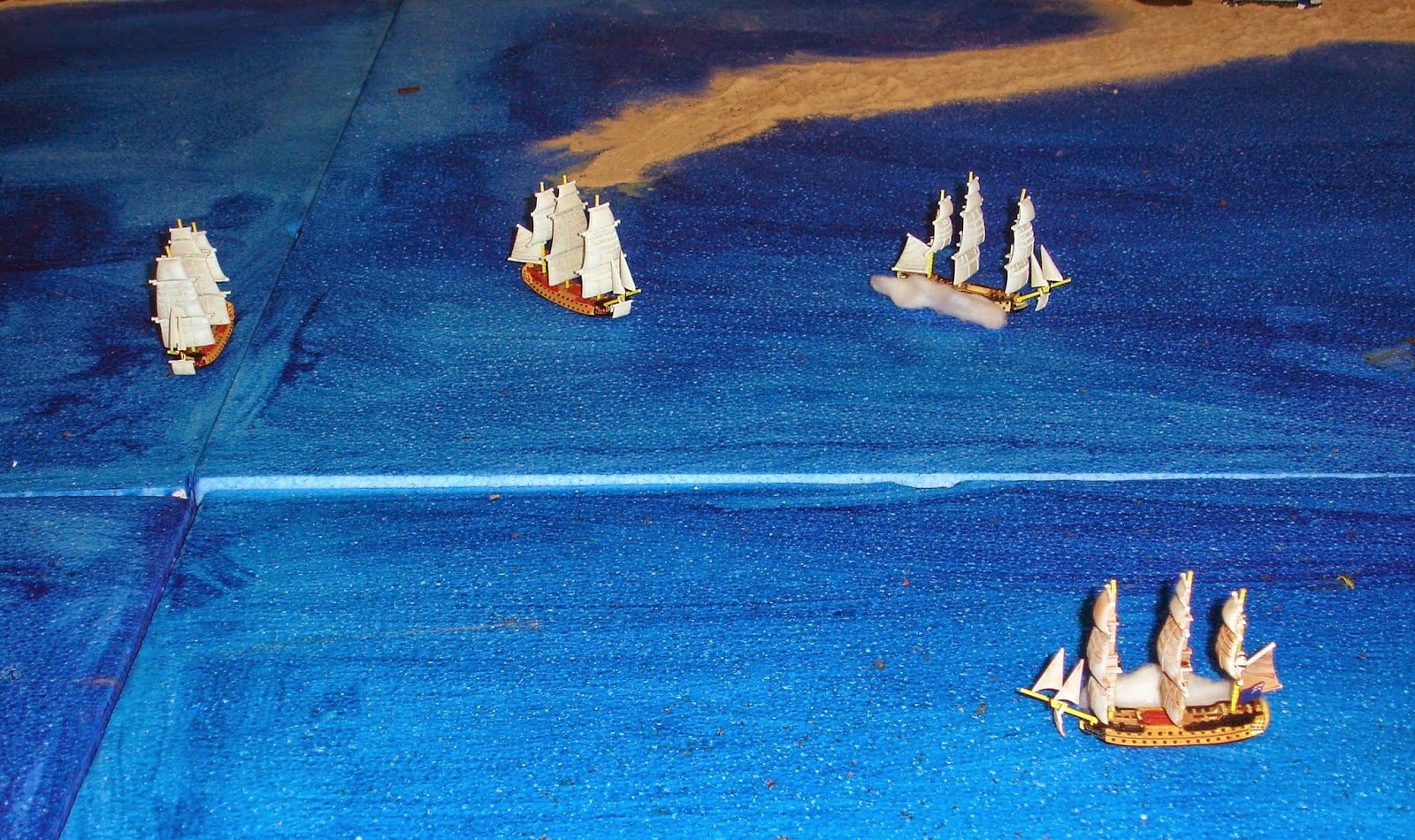 The Diomede has finally got underway, creeping slowly forward.  I calculate it will be a very long battle. 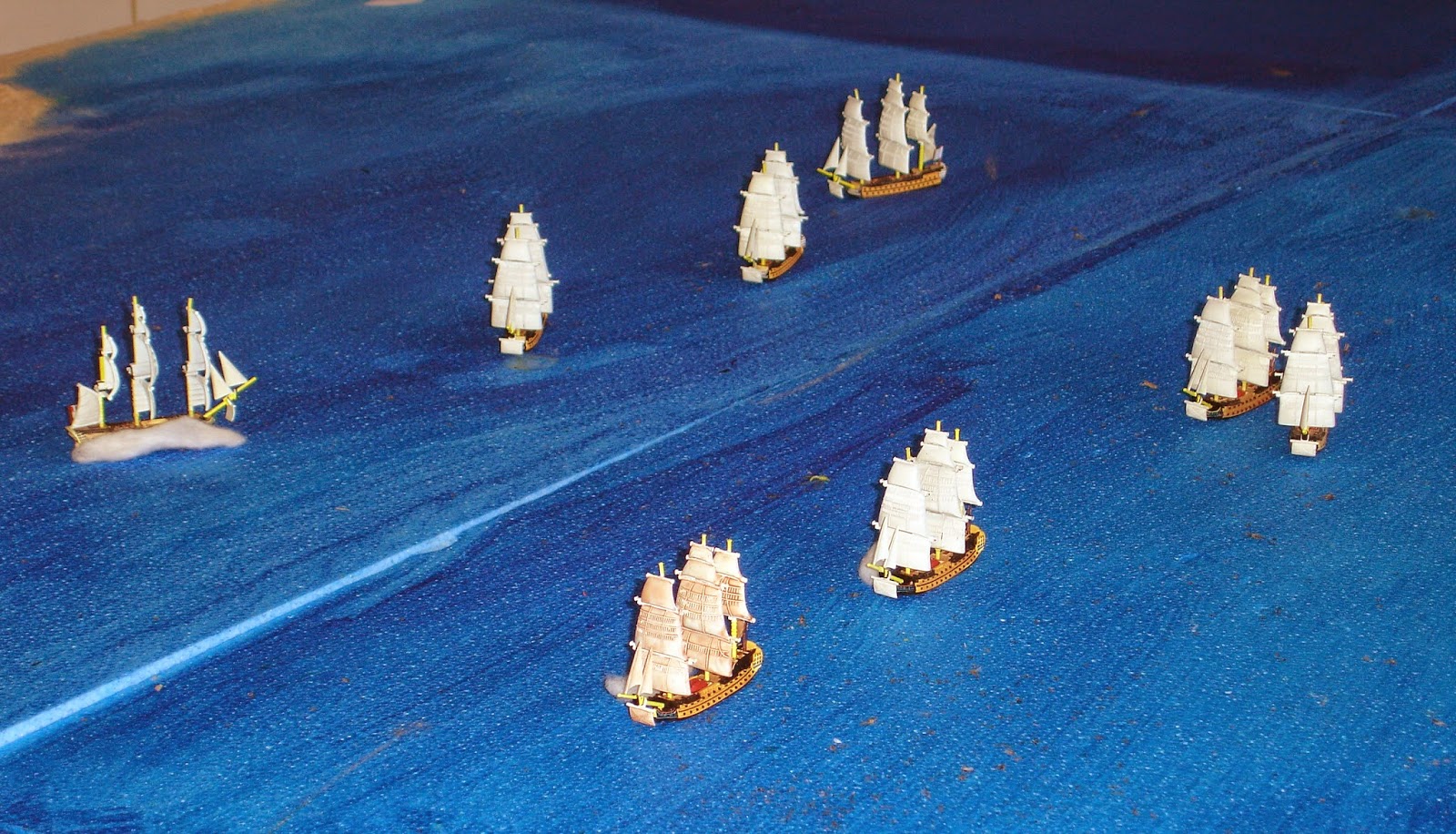 The British fleet bearing down.  The rear ships in the first column were having some difficulty 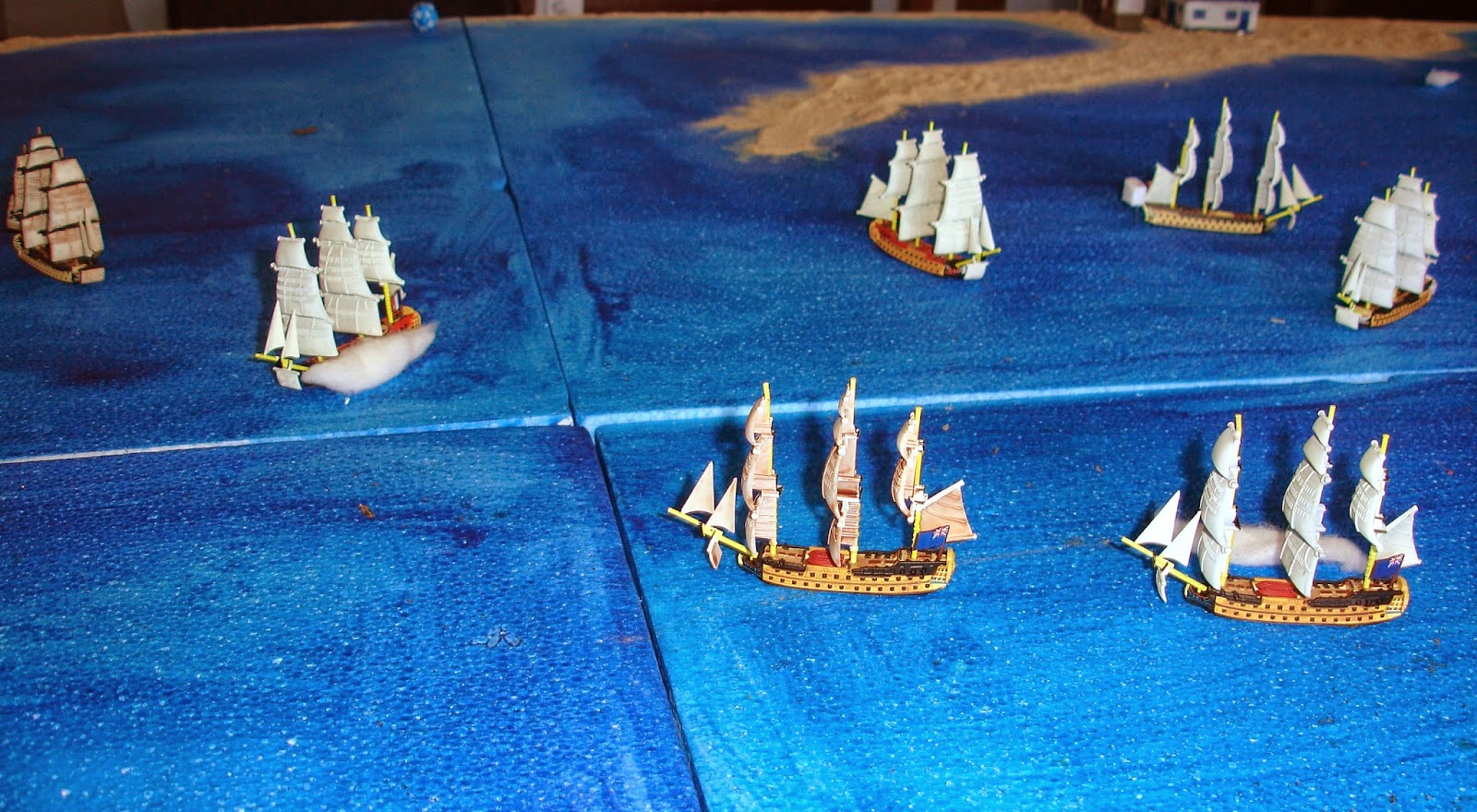 By turn twelve, Diomede has got into action.  The Juipter has finally raised its anchor and now has it stowed, ready to get underway.  BUT the Brave has struck after being bow raked (which forced a morale test which my poor dice skills and average captain and crew of the Brave could not pass).

The Juipter gets bow raked and strikes in turn fourteen.  The Diomede continues to fight and gets lucky shot in that kills the British Admiral. 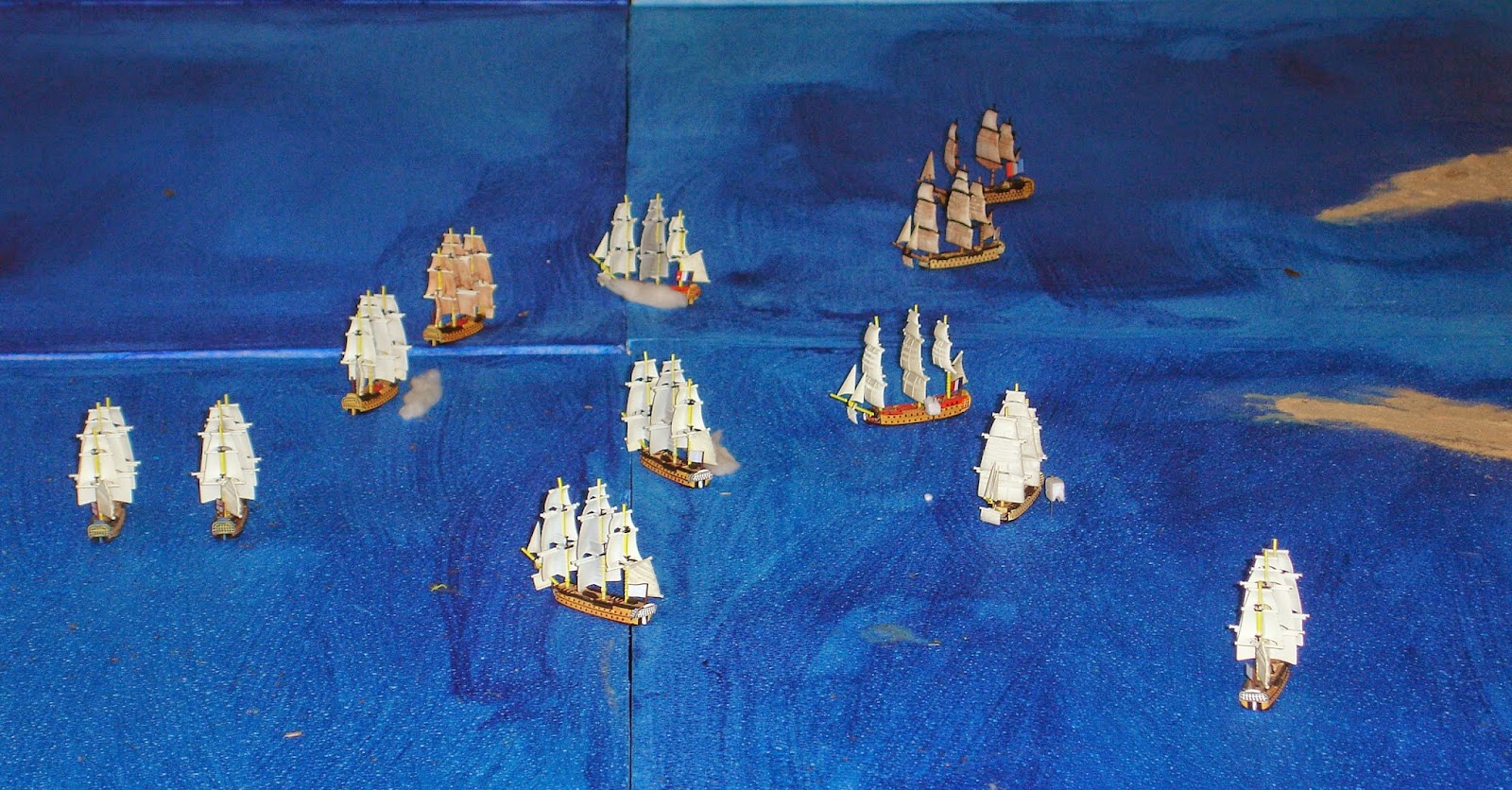 The five French ships are on the right of the picture.

The Diomede is fighting like a lion!
The Juipeter is grappled by a British ship and both are drifting.
And finally on turn sixteen the Alexandre has raised her anchors and is underway. 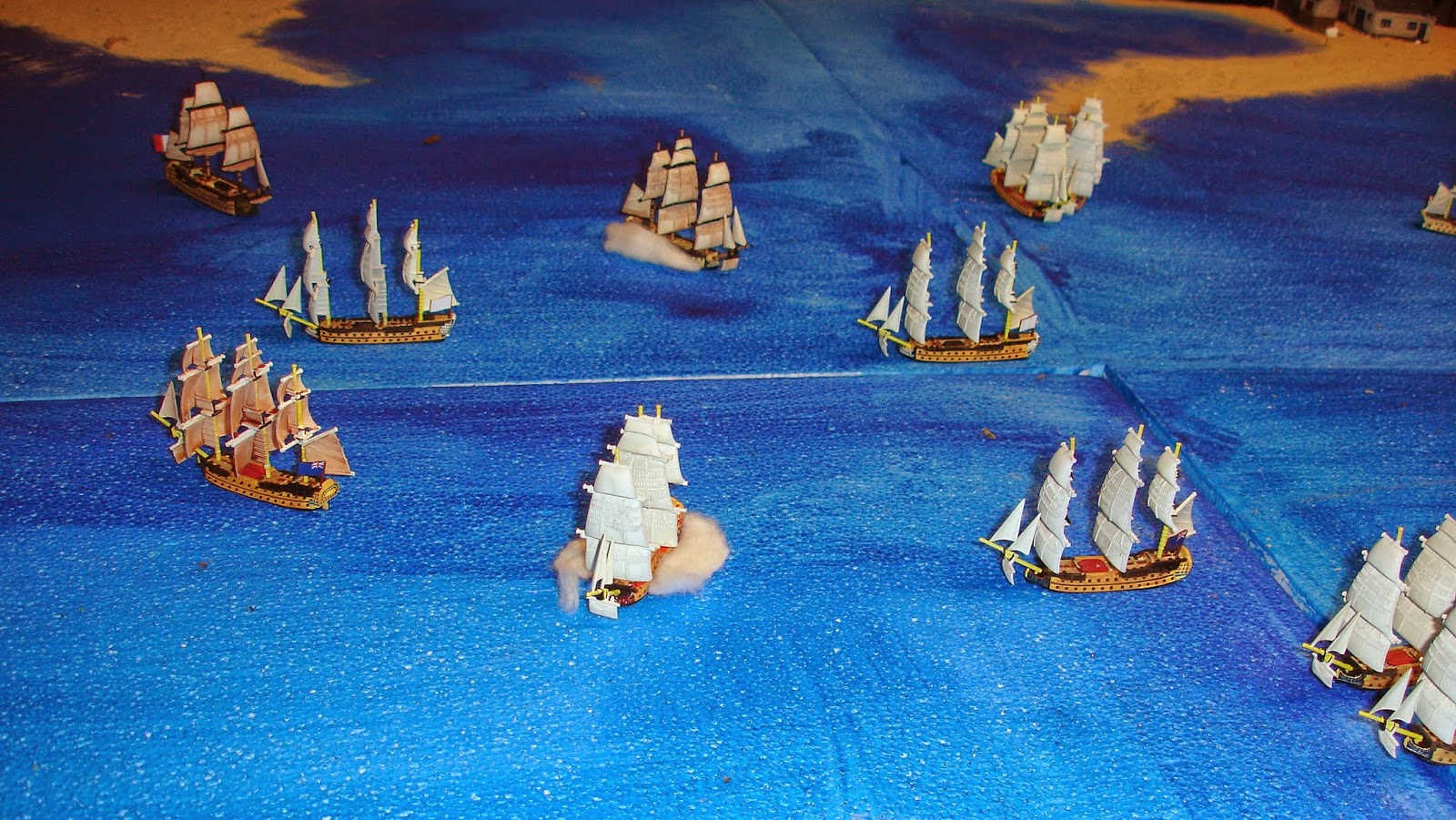 Turn eighteen and the gunners on the Diomede get another lucky shot in on the same British ship (being stern raked this time) and kill the replacement admiral. The Brave is considering escaping as the British ships have all sailed past.  The Imperial is now engaged and if you look very closely you can see the French Admiral's longboat just off the port side of his flagship.  The fire template is next to the Diomede which has now accumulated some telling damage (as had the British lead ship).  The arc and angle for rakes was very tight especially compared to the Sails of Glory equivalents. 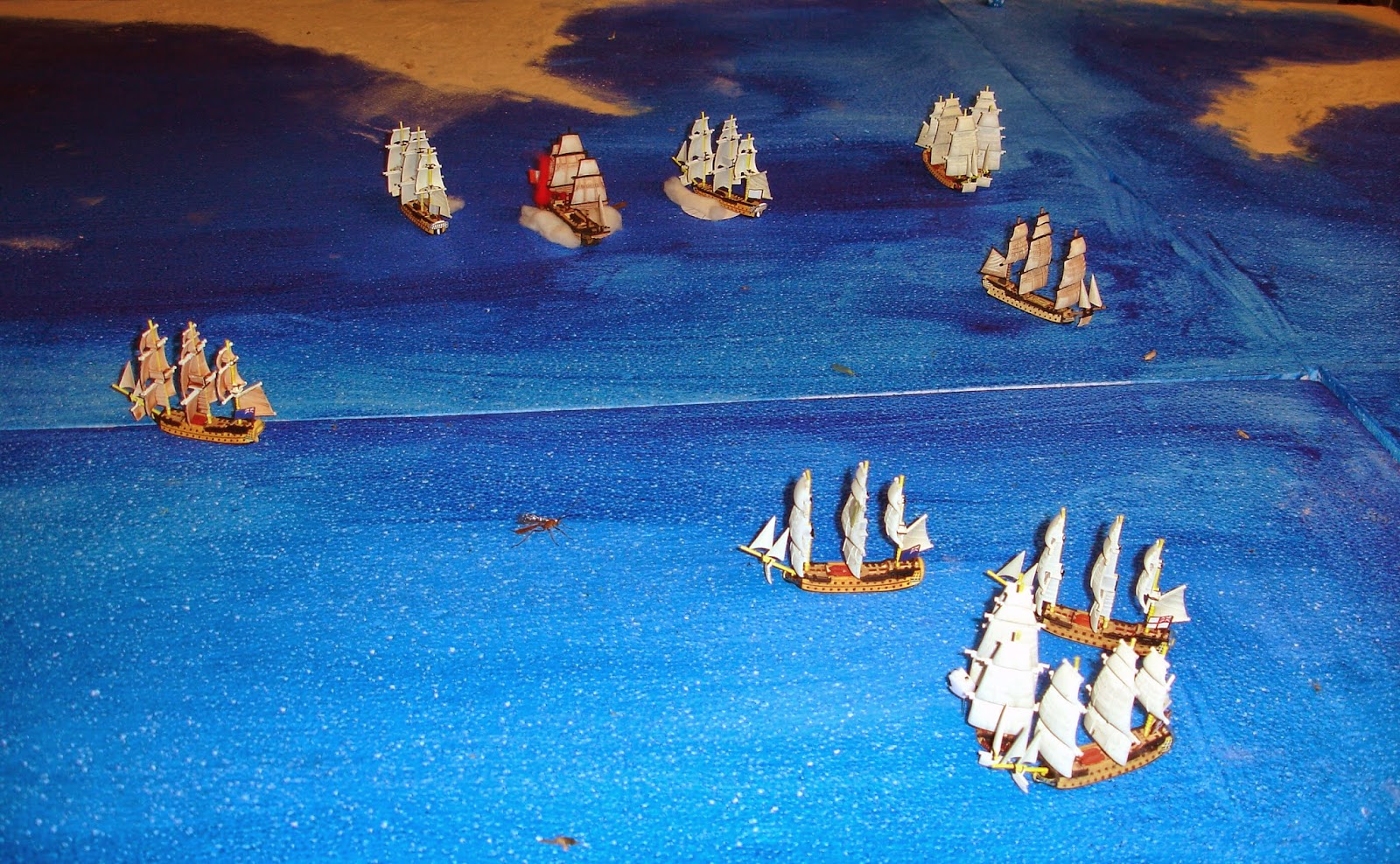 The end of the Diomede.  Turn twenty and there is a brief fire on the Imperial as the British ships circle her, like moths round a flame.

And this is where we finished, turn twenty two or thereabouts.  It was late and the table had been invaded by an assortment of bugs.  The Alexandre and Brave might well escape, but the Imperial was still weighing anchor and although a monster ship, was outnumbered.

Ships travel half as fast they do in SoG, but fire twice as fast with no reloading.  The only limit to a ship firing is the tight arc and a capability test.  If you get in position to rake, you will get to rake twice and each rake generates a morale test.

The ships certainly pound away at each other.

Signals and initiative need some more thought, although I stress this was first play and we only had the one copy of the rules and I have not read them.

Based on the success of this game (in providing a realistic result) I am interested in seeing the fourth edition of the rules.