Napoleon (Mark B) was having a late breakfast when news arrived that the Prussians were coming. He decided on an immediate attack.

Mark from the ANF joined the French side and Stephen B took command of the Anglo-Allies (Stephen N would be arriving later).  Yes, it was two Marks versus two Stephens.  I umpired and mentored and tried out various rules from the new Edition of Napoleon's Battles as well as some variations I was testing (I will make a subsequent post on these rule adaptions). 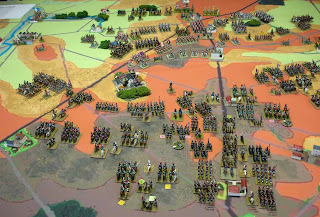 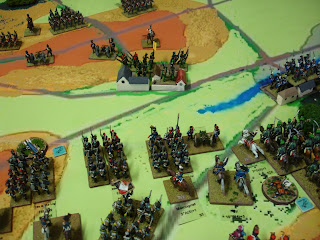 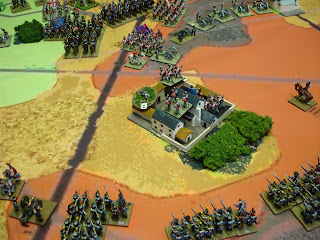 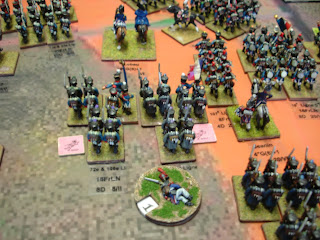 Bachelu's division was very badly mauled by the RHA. 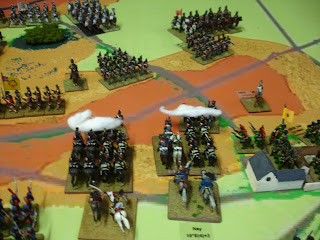 Ney leads a division of heavy cavalry against the Anglo-Allied artillery near Papelotte. 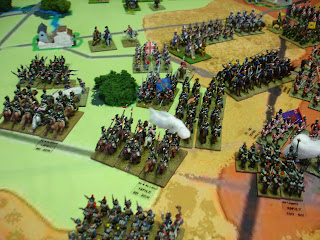 On the French left Pire's cavalry attacks as Jerome's troops attempt to isolate Huoguomont.  Wellington uses a Free Roll to save Cooke.  These French attacks fail.

End of the 12:00 turn and Ney has started to contest the ridge on the Anglo-Allied left as the French are trying to push through the gap between Papelotte and Smohain. 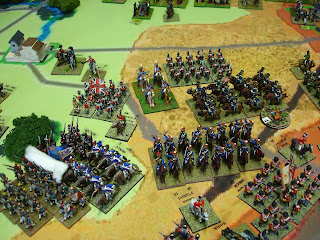 The 1st and 2nd Ligne have attacked, but Arenschildt's cavalry spoil their attack.  This is a good example of interpenetration, the cavalry having come from the rear.  The units might looked like packed formations but they are around 80% empty space, the critical thing, and only possible because of the small size of Arenschildt's brigade, is that there still needs to be space to fit.  It is also an example of a combined arms attack (or rather defense).  The French infantry broke, but British cavalry (or rather KGL) went on to break against a brigade of Cuirassiers which then triggered a counterattack by the French cavalry that crushed another Anglo-Allied cavalry brigade which in recoiling disordered yet another cavalry brigade. 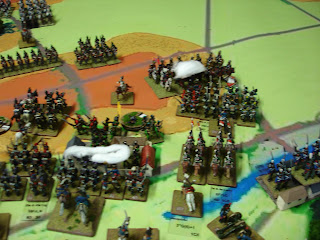 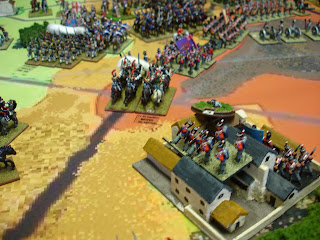 The Carabiniers have now joined in the attack on the Byng's Guards brigade covering the rear of Huoguomont. 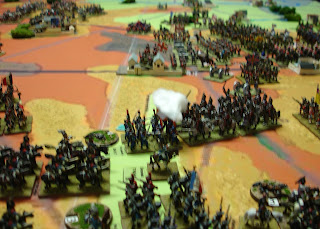 The Scots Greys make their first charge destroying a brigade of the French 2nd Division which had been badly shot up and then shot up some more by the RHA positioned to the rear of La Haye Sainte. 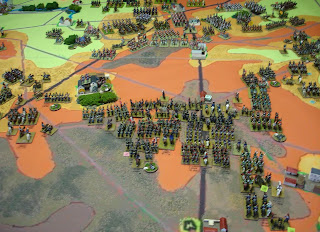 The end of the 12:30 turn.  The French have captured Papelotte, but their other attacks have been repulsed 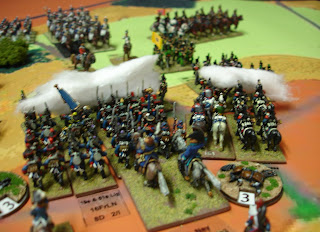 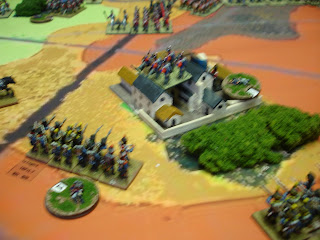 The defenders of Huoguomont are being worn down. 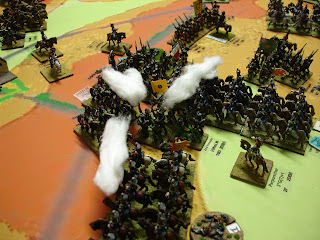 The Anglo-Allies counter attack against Ney. 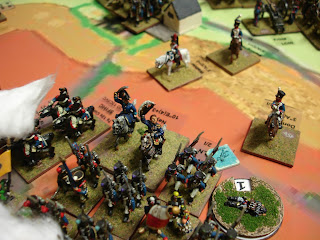 Ney is triumphant!  Well, not quite.  The brigade to which is he attached is routed but he escapes. 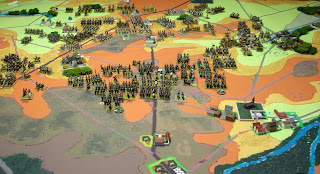 End of the 13:00 turn.  Up till now the French have been losing more troops than their adversaries, but this changed with this turn.  Both sides have had a unit dispersed and have used two Free Rolls. 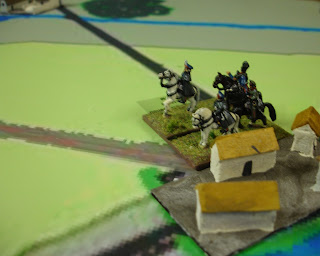 The other significant thing about the 13:00 turn is the arrival of Blucher.  But has he brought any troops with him? 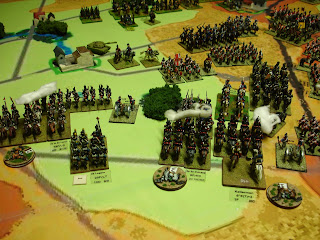 Another major attack on the Allied right.  Is that the Cumberland Hussars about to engage the French Cuirassiers lead by Kellerman? 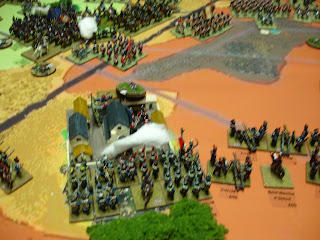 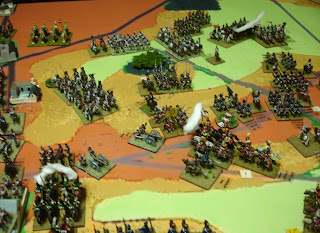 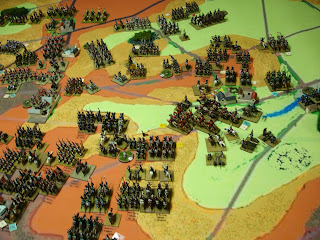 The French cavalry are repulsed, but it cost Wellington three Free Rolls. 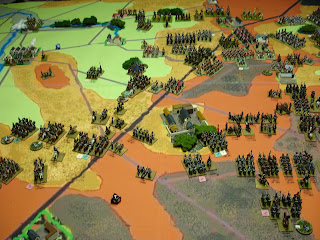 The attack on Huoguomont failed, but the defending Guards died to a man to achieve that.  The Allied right also has been pushed back.  The Cumberland Hussars have retired to Brussels to announce Wellington's defeat.  Are they right?

At the end of the French 13:30 turn we called it a day.  The Anglo-Allies have a chance to reoccupy Huoguomont and repair their lines.  The Prussians will also start to arrive.