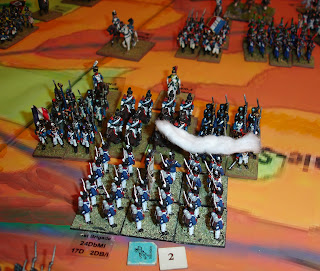 Poor old Bijlandt's Brigade.  The 11:30 deployment I used has them sitting out there just ripe for a combined arms attack.  The forward Allied batteries evaded. 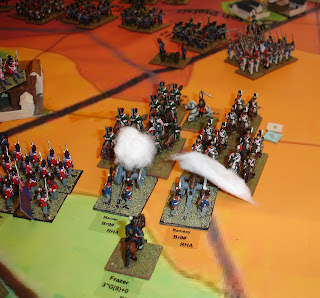 The Allied right flank witnessed an early onslaught from the 2nd Cavalry Division in Reille's Corps.  The two batteries were lost, but the French lost the brigade of lancers in a counterattack. 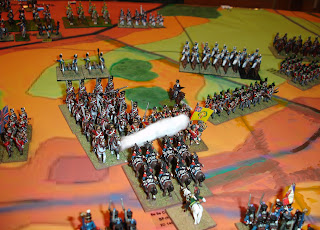 The Scots Grey's going to Picton's rescue.  The Allied command structure is a challenge, the worst part being the cavalry and artillery. 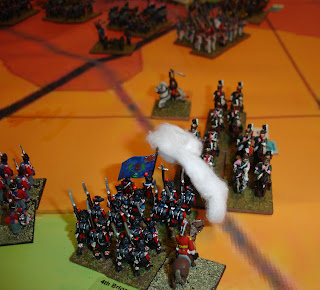 The British 4th Brigade finish off the exposed lancers that had attacked the batteries. 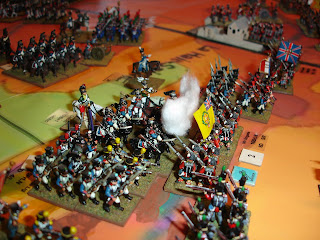 The French renew the attack on Picton's Division.  La Haie Sainte in the background. 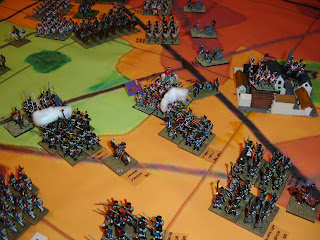 Reille has by passed Hougoumont and is attacking the Allied right flank.  Jerome leads the way. 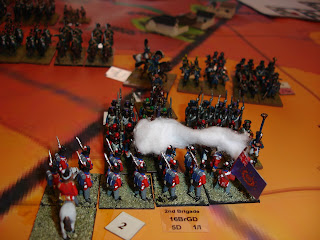 Reille suffers a counterattack by the 2nd Brigade of Guards. 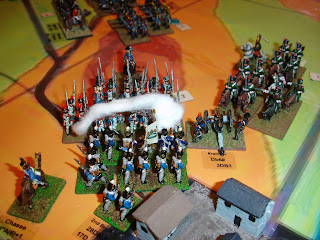 Chasse had been ordered to advance with the defenders of Braine l'Alleud.
It did not prove a wise move. 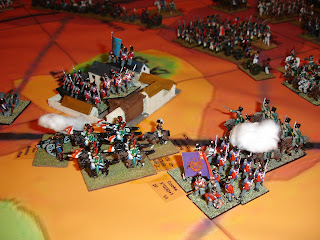 Lobau has now been committed to the attack on the Allied right flank, sweeping in around Hougoumont. 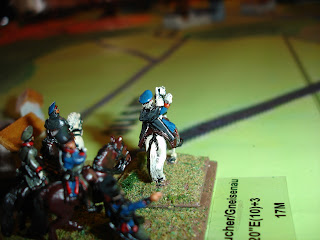 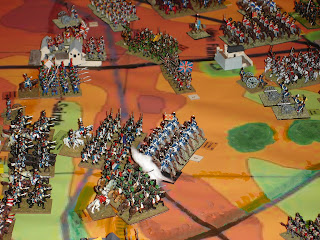 Another French attacks goes in on the Allied left. 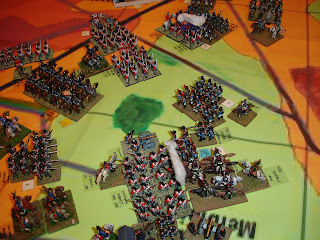 Reille and Lobau were finding it hard going attacking the Allied right.  The Guards are still fighting, but are almost down to the last man (they ended up dispersing on winners losses).  The flanking fire from the other Brigade of Guards in Hougoumont helped the allied cause throughout the day. 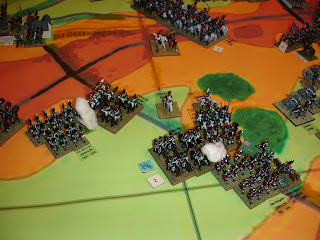 The French have broken through between La Haie Sainte and Papelotte and attacked Lambert.  His Division was already fatigued due to the earlier loss of the companion Hanoverian Landwher. 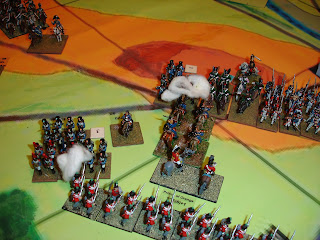 The fighting still rages on the Allied right.  The Prince of Orange leads a charge of Merlin's Dutch-Belgian cavalry brigade. 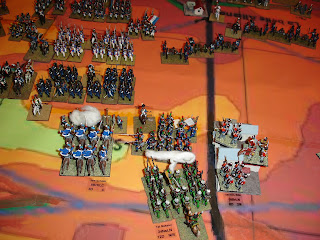 The 1st Nassau attack the 13th Legere by the side of La Haye Sainte.  Notice the advance of the Imperial Guard.  The KGL Troopers took out the guns, but bounced on the Young Guards who formed square. 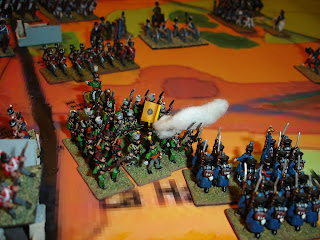 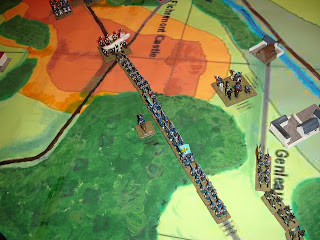 The Prussians are coming!
Jacquinot's lancers were waiting and produced quiet a set back, routing one unit  and then keeping under control to force Blucher into a hasty "move to safety" before hitting a second unit of Prussians. 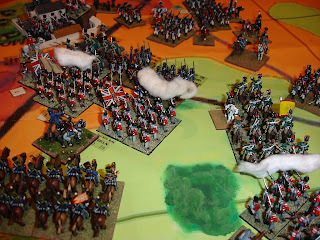 Back on the Allied right and Bachelu's division makes another attack supported by Lobau's cavalry.  Hill is confident he can out roll them. 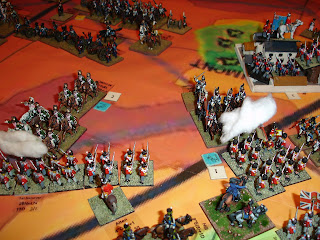 The French now make an assault on the Allied centre. 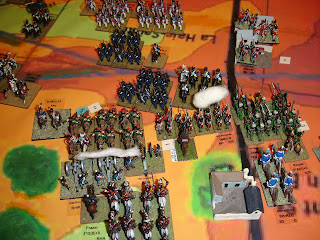 The Guard attacks!
The Scots Grey tie with the Guard Chasseurs a Cheval which were lead by Ney after an earlier unfortunate incident.  The Horse Grenadiers, shot up by the defenders of La Haie Sainte as well as the 1st Nassau, fail to make an impression on the British 8th Brigade led by Picton himself.  Picton then led his boys into the Young Guard and routed them. 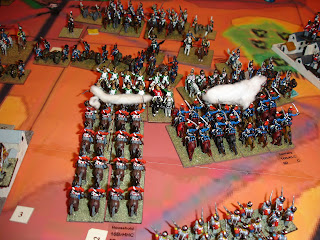 The Hanoverian line had held firm in the Allied centre and a counterattack now went in by the British House Hold Cavalry who were matched by the Empress Dragoons.  British Hussars charge the disordered French cavalry.  In both cases the French were stopped, but not significantly repulsed.

As we only had the one day to play and were all pretty exhausted at this stage, we called an end to the game.  We had played eight turns, finishing with the end of the 15:00 turn.  Thirteen turns remained... 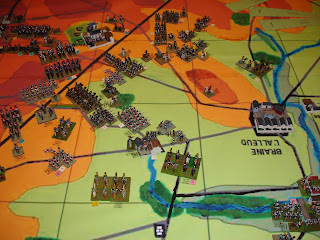 This is how things stood on the Allied right.  French success on this flank was looking remote, but not impossible. 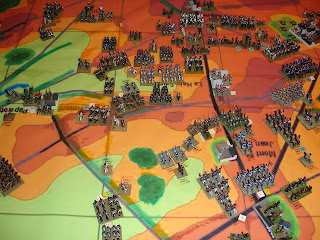 The Allied centre was holding, but the left had been penetrated.  The Brunswick Division has been moved to block the penetration. 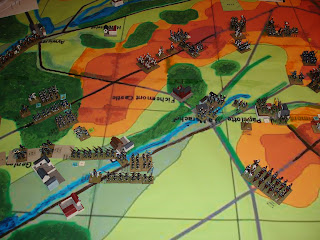 The French are moving D'Erlon to block the Prussians, but they would soon be arriving on the Allied left where Papelotte and La Manche (Smohain) still held firm. 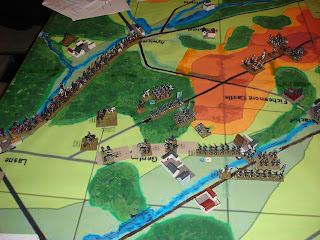 Prussian deployment is a nightmare with the woods and long strung out march columns being difficult to command and change formation.  The one thing I had forgotten to bring were limbers and we had to make do with card cut outs.  Most embarrassing! 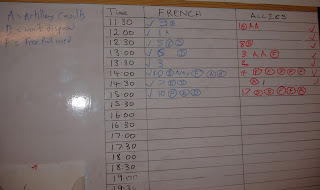 With the exception of the Guard, the French did not have many fresh troops left.  They did have five free rolls left.  It would have been interesting to see how the end game worked out.

I will make a separate post acknowledging players and contributors and another post on my observations of using the Napoleon's Battles rule set for the game as well as publishing the order of battle and other information.

More photos will appear on the NWS blog and I will update this post with a link to them once that has occurred.