Yesterday Mark B and myself joined with the ANF crew in their game of Waterloo using their modified Shako rules, 1/72nd style.  A chance to participate in another game of Waterloo, regardless of scale or rules was not to be missed. This one was a biggy, full of wonderful nostalgia.  The following photos do not even begin to so the scale or all the wonderful figures in play. 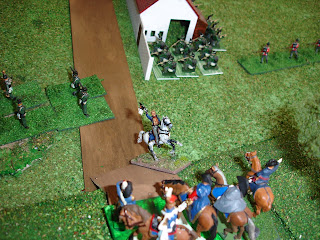 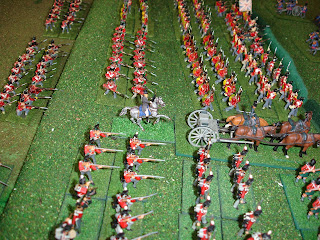 Part of my command on the left of the Allied line.  There is a civilian waving a umbrella about as if the troops belong to him, not me. 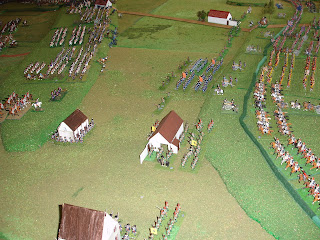 My command - from the farms of La Haie and Papelotte to the road to Brussels.  Who deployed Bijlandt's brigade out there? 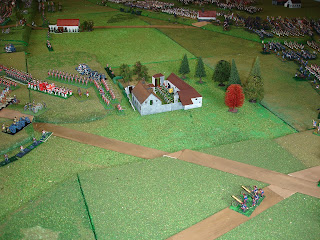 The Allied right flank behind Hougoumont. I have ordered Bijlandt's brigade to face left and prepare to move off. 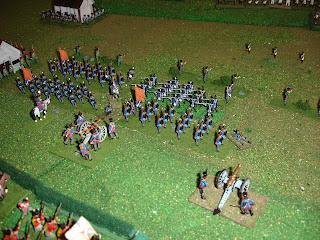 There I am, in the midst of the troops as the French artillery starts to inflict mounting losses.  Our guns return fire, but carefully targeting their troops. (The gun with two figures is from my collection and again Waterloo 1815 figures - they are a small conversion on the Foot Artillery to represent Dutch-Belgian Horse Artillery). 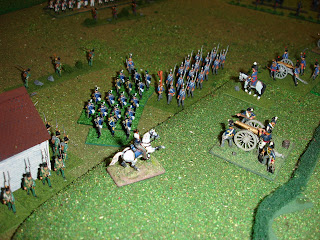 The two lead militia battalions have declined further service after receiving three hits each.  Will I be able to get the rest of the brigade to safety?  I madly wave my hat to encourage them. 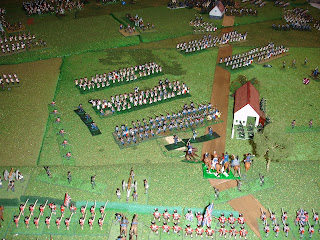 Looks like Wellington is about to be run over by a French Division (the 2nd). 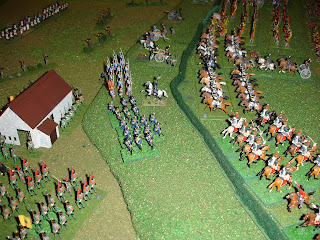 My Chapeau of Glory leads my men to safety.  British cavalry are having to make way for them.  If the 2nd Dutch-Belgian Division has to take a morale test there is a risk that La Haie, Papelotte and Smohain will be abandoned without a fight. 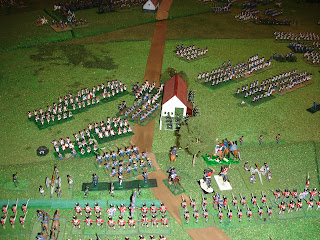 Wellington ducked behind the tree.  British artillery fired canister at a leading French battalion, dispersing it, like chaff before the wind.  An attack by the French on La Haie Sainte is repelled, but the French will subsequently rally.  Boo hiss! 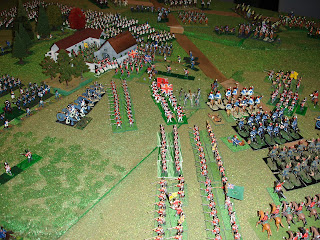 On the right the French are trying to sneak around Hougoumont.  There has been some intense fighting by the French cavalry of their II Corps as they try and crowd us in just as we try and jam in our reinforcements.

The first part of the battle comes to a close with four turns done leaving us to start the 13:30 turn next week.