A Walk in the Dead Woods - Third Time Luckyish

The goblins set out to scout the Dead Woods for the third time, but now they have hired Berkley a Q3 C4 Leader (the C4 value because she is armed with a chainsaw).

Mark B took the Goblins, Stephen the Skellies, while I umpired and attempted to control the dog. 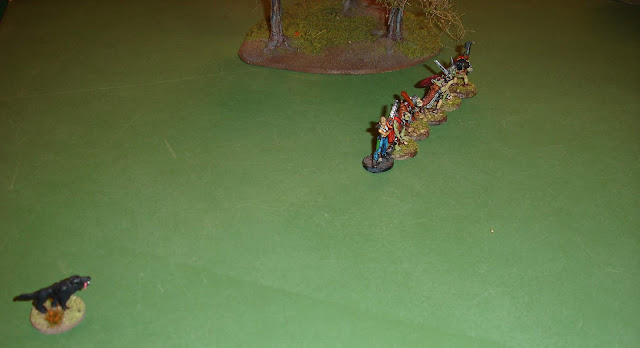 The goblins have hired Berkley to lead them in the Dead Woods.
She seems to be doing a good job at keeping them in line,
I suppose it is easy when you have a chainsaw to back you up.
Even the dog is well behaved. 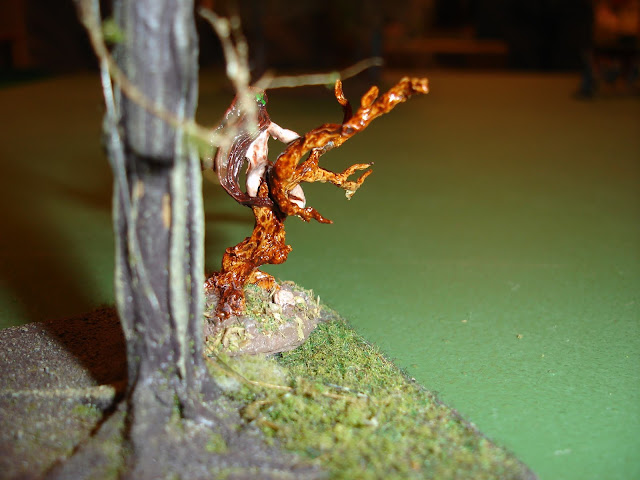 Whoops, perhaps the dog was not so well behaved.
It soiled the environment angering the local Dryad. 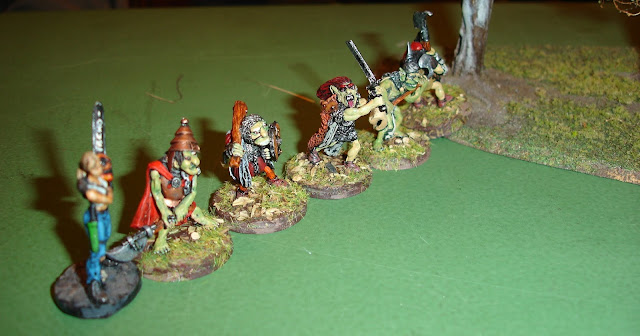 Berkley pushes the Goblins on, quickly scouting the second patch of trees.
The Dryad is out of range at this stage.

The Goblins don't seem so keen either...
However, the third patch of trees is scouted. 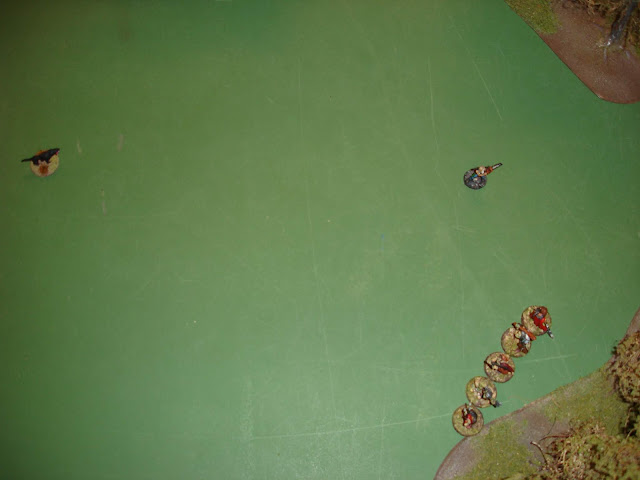 Berkley sends them on to the fourth patch of trees... 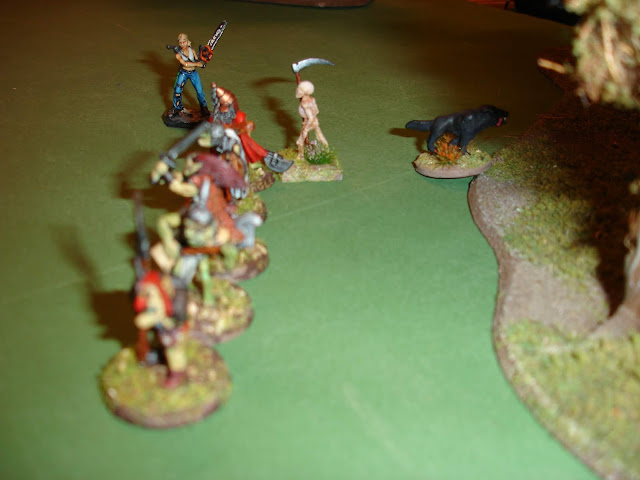 The dog goes there too, and guess what?
He digs up some old bones that turn into a Skellie! 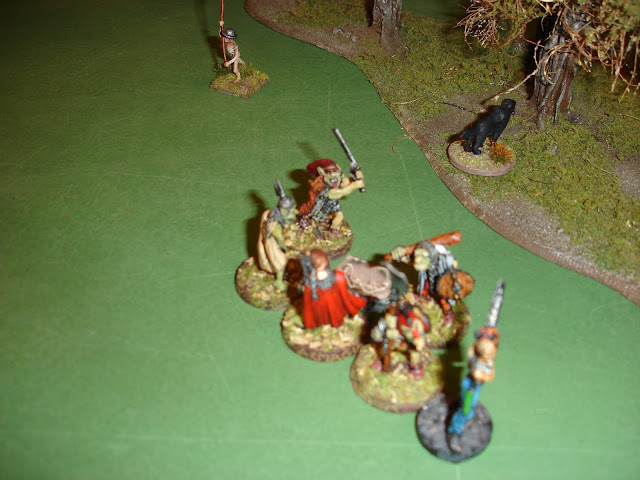 The Goblins gang up on the skellie and reduce it to dust,
but the dog has dug up another one. 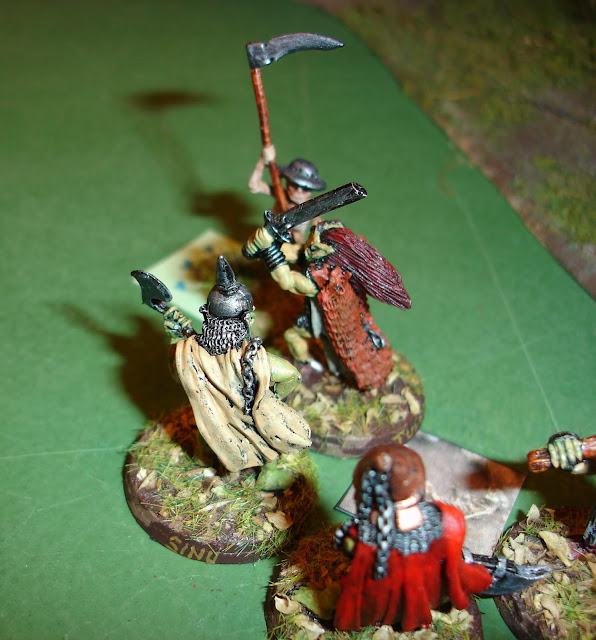 The goblins battle the new skellie. 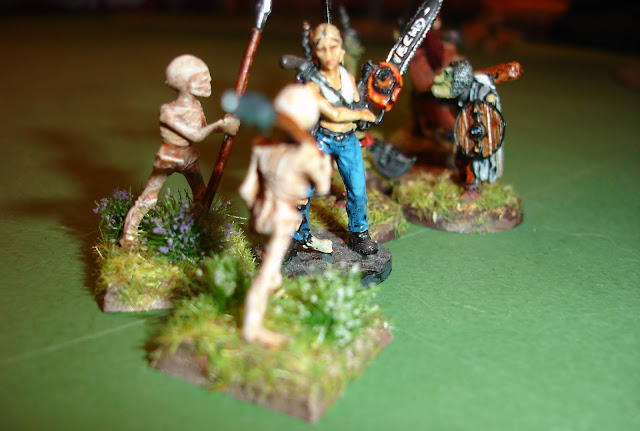 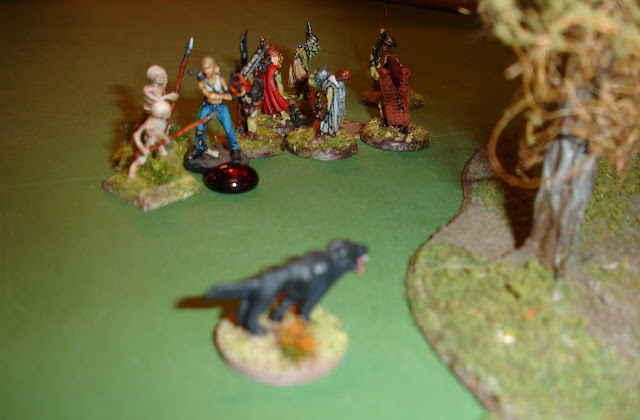 The dog is a blur rushing about digging up old bones.
Sadly Berkley is down. 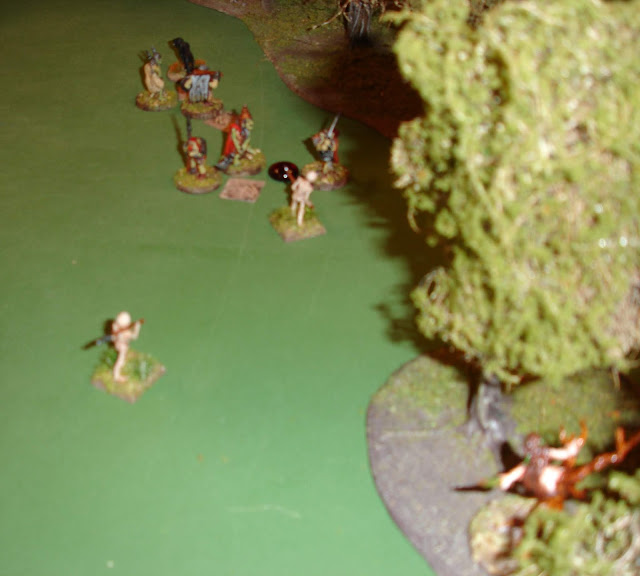 Berkley is dead :-(
Worse, her chainsaw has angered the dryad. 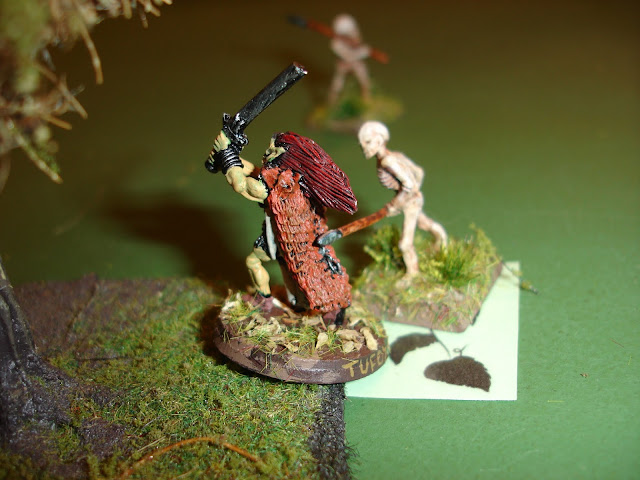 A goblin is transfixed by the dryad and then slaughtered.
But at least the fifth patch of trees has been scouted. 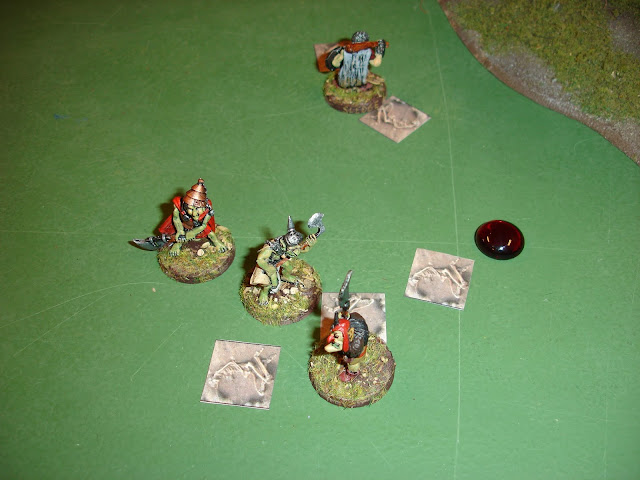 The remaining goblins have defeated the immediate skellies,
but they are deep in the woods... 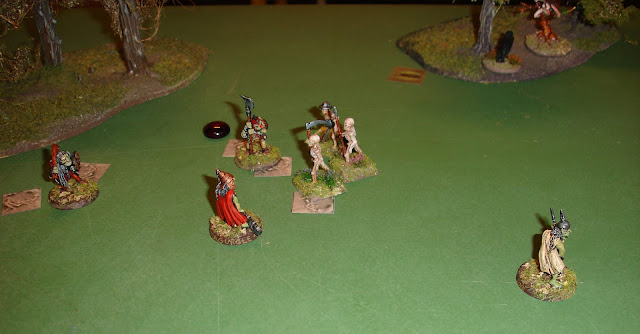 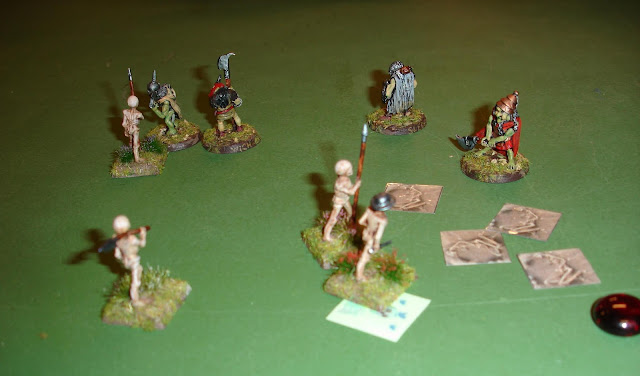 The four Goblins left think it is probably time to go home.
Especially as the Goblin with the red cape is about to meet a gruesome death. 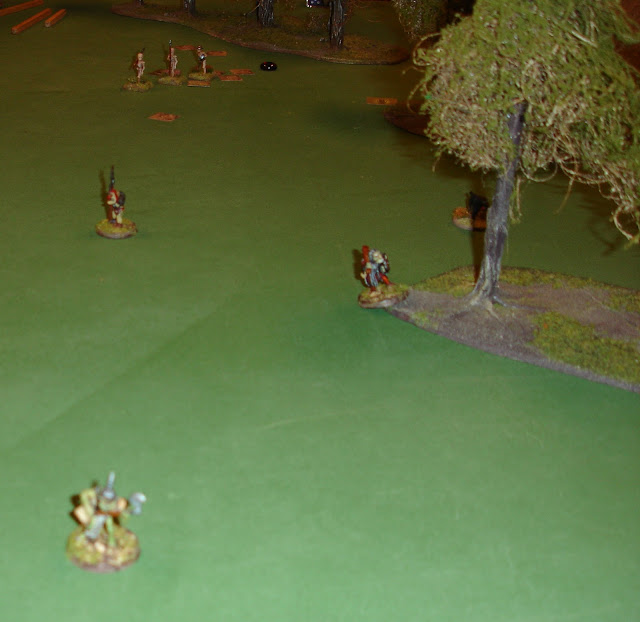 And then there were three.
Flee!

However the sensible Goblin with the club took time out to check the last patch of trees. 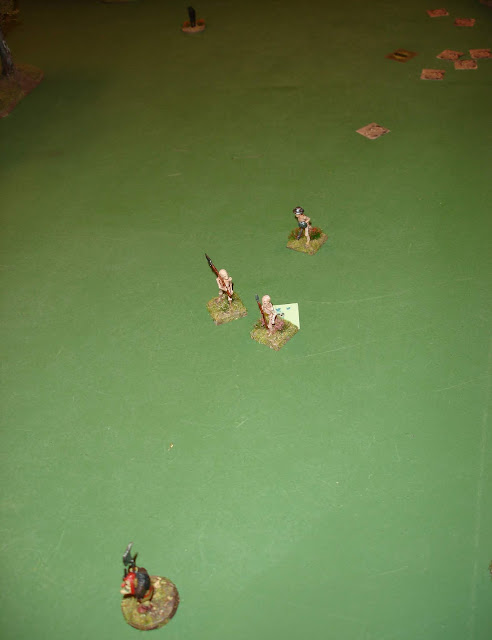 The Skellies give chase.

That dog is still digging up bones... 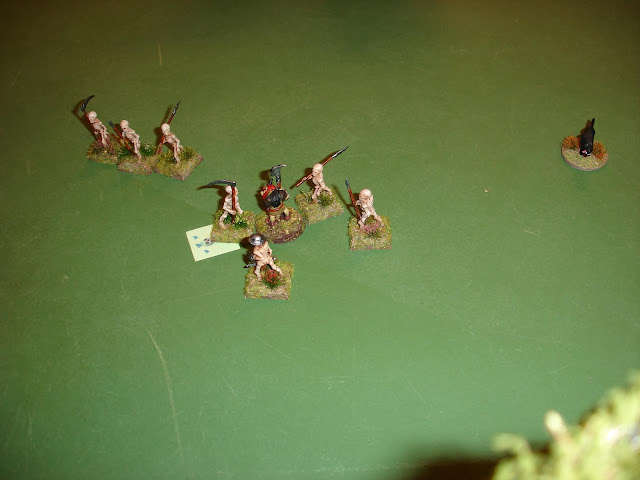 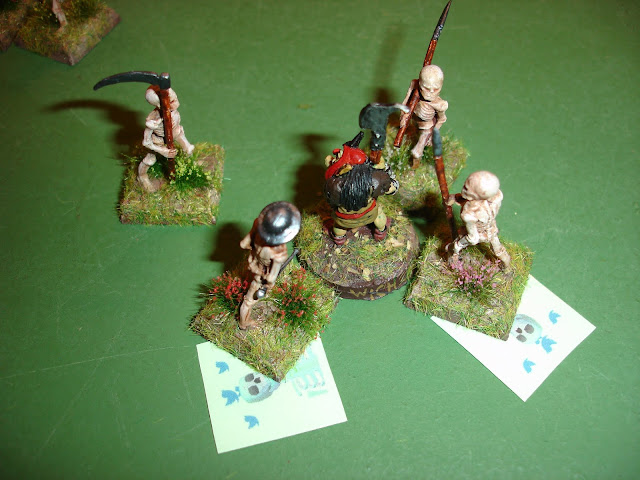 And fights some more... 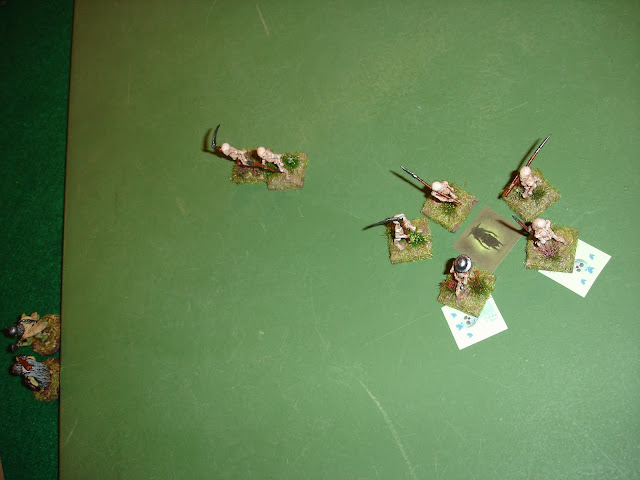 But dies.
However two Goblins escaped to tell the tale.

I think the days of walking the dog in the Dead Woods are over.

It took awhile for the Skellies to appear and I feared the game was going to be a bit of a fizzer, but at the halfway mark things really started to happen.  Rather than put the minis on their sides, I used markers to show they were knocked down.

What follows are my notes for the scenario.  The table set up was six patches of trees, numbered one to six clockwise.


The aim is to keep it simple, but provide context.  As such the Goblins are all Q4 C3 and the Skellies Q3 C2.  My justification for the difference in ratings is that the Goblins were carefully scouting the area, but better armed against the more ravenous Skellies and their improvised rusty weapons.

The Goblins, under the ruse of walking their dog, are attempting to scout the wood.  It has six locations and they need to visit each one and then return to complete the mission.

The dog was on random control.  First throw a dice, halve and round up.  That gives the number of dice to throw for activations for the dog.  The dog is Q3, well motivated to sniff out bones...

After throwing the number of generated activation dice and seeing how many pass the Q test, the dog is then moved that many times (which will be between zero and three) in the direction of one patch of trees, based on a dice roll (each location is numbered 1 to 6).  It moves Long.

If the dog comes into contact with a location it will have a sniff to see if it finds any bones.  One dice is thrown and the resultant value used to throw further dice.  For each of these subsequent dice that are equal to or more than the Q value of a Skellie, a Skellie pops up (so zero to six Skellies may appear each time the dog visits a location).

If on its activation roll the dog throws straight 1s, it is considered to have soiled the environment, angering the local Dryad.  A dice is then thrown and the Dryad placed (or moved if already on the table) to the associated location.   The Dryad is a static creature otherwise and is Q3.  She will attempt to Transfix any Goblins within Long to her.  Throw three dice per Goblin in range.  For each success that Goblin has to pass a Q test to avoid being transfixed. Any attack against a transfixed Goblin receives a plus 2 combat modifier and any successful attack is lethal.  A Goblin needs two successes to break free.


The leader hired by the Goblins is Berkley, Q3 C4.  She increases all Quality rolls by one for Goblins within one Long.  For the cost of one action she can perform a Group move (p40) for Goblins that are adjacent to each other or a regroup to move all Goblins within one Long back together. If Berkley rolls only one successful action, she cannot use it to perform a group move.

Whenever Berkley is used in Combat she will anger the Dryad (who doesn’t care for chainsaws).  Berkley is immune to the Dryad.

Email ThisBlogThis!Share to TwitterShare to FacebookShare to Pinterest
Labels: Fantasy, Songs of Blades and Heroes