While I have the troops labelled I like to give them a go.  Quatre Bras also makes a good training game for Waterloo.

After the last two games and what I considered to be solid French victories, I had a look at the SPI game Ney vs Wellington.  I was pleased to see the terrain was a good match along with the order of battle, if not the order of arrival.  As it seemed to give the allies a better chance I thought I would adapt it.

The game starts an hour later (Ney was very cautious).  This means that Merlin's cavalry starts deployed just west of Quatre Bras behind Bossu Wood.  Picton has also arrived and I wasn't sure whether he should be in march column or attack column, I decided on the latter for play balance.  Brunswick (minus the light brigade and artillery) arrives at 15:00, Alten at 16:30 and Cooke at 17:30 with the balance of the Brunswick corps at 18:00.

The French start without the Guard lancers that arrive at 16:30 and the Dragoons that arrive at 18:30.  I continued with the Ney handicap of being just a 4 activation leader, not a 10 (as would be the normal case for a CinC).  I think this is particularly relevant as he did not have a staff or the trust of his fellow officers.  As with the previous games, this was not such an issue as he spent his time leading attacks which let the other generals do the commanding.

Mark W took the allies (in practice for his up coming role as Picton) and I took the French. 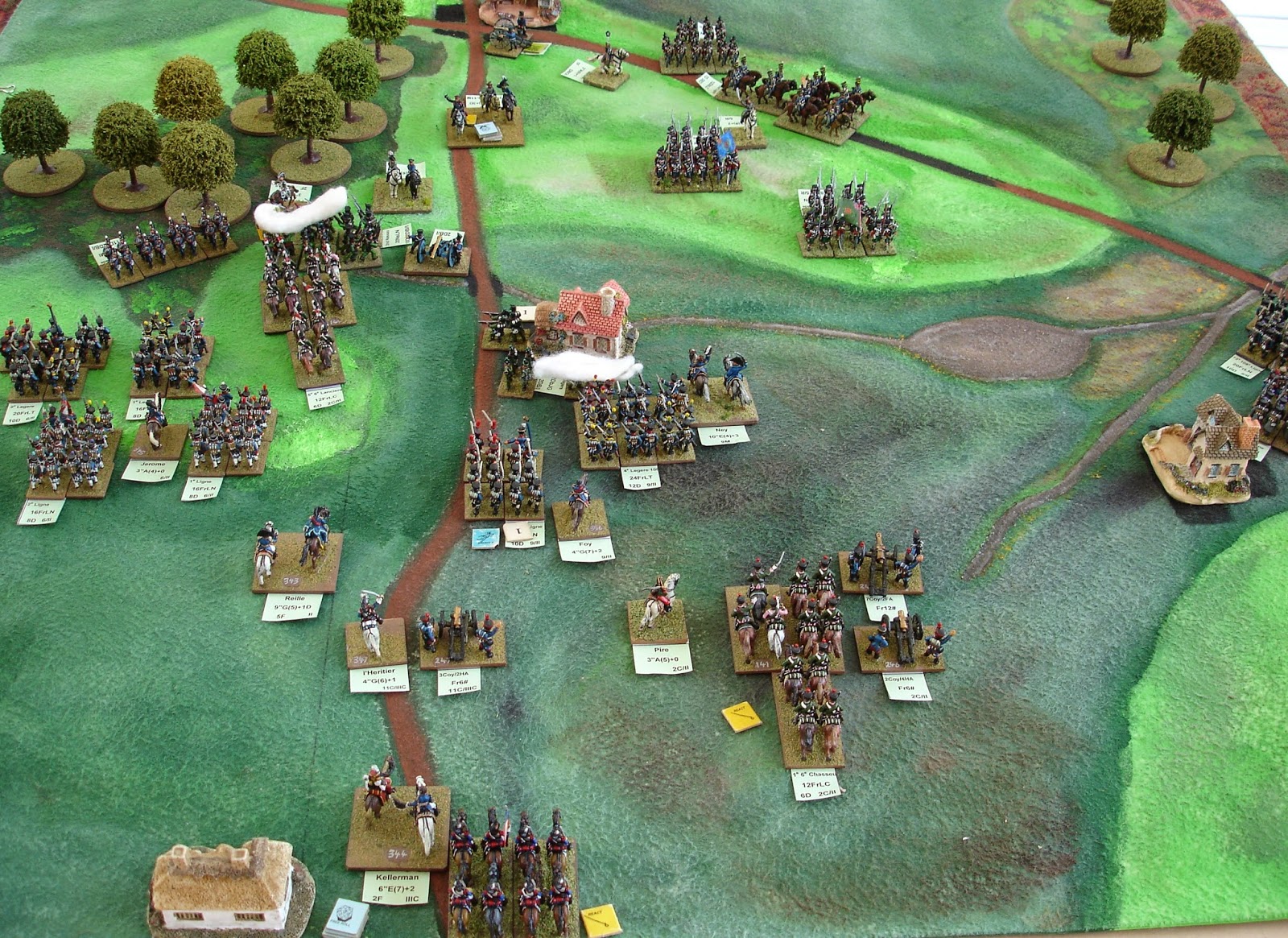 At the end of the first hour Ney has attacked the farmhouse and flung cavalry at the 2nd Nassau.  Bachelu's 5th Division has been sent off on a flank attack via Thyle and Jerome and the 6th Division are approaching Bossu Wood. 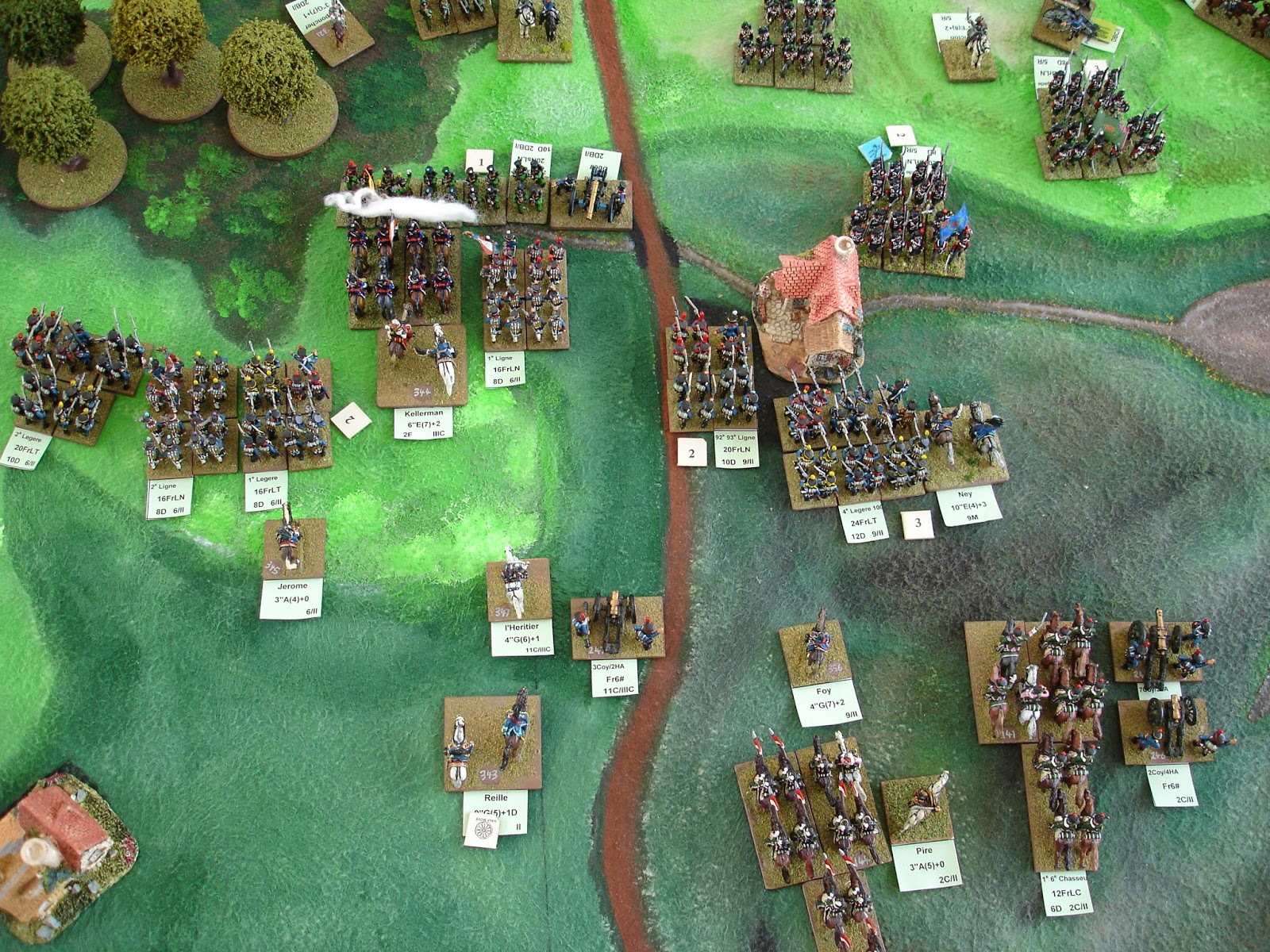 After the lancers were repulsed in went the big brothers, supported by the 1st Ligne who stopped the Nassua forming square, producing a devastating combined arms attack. 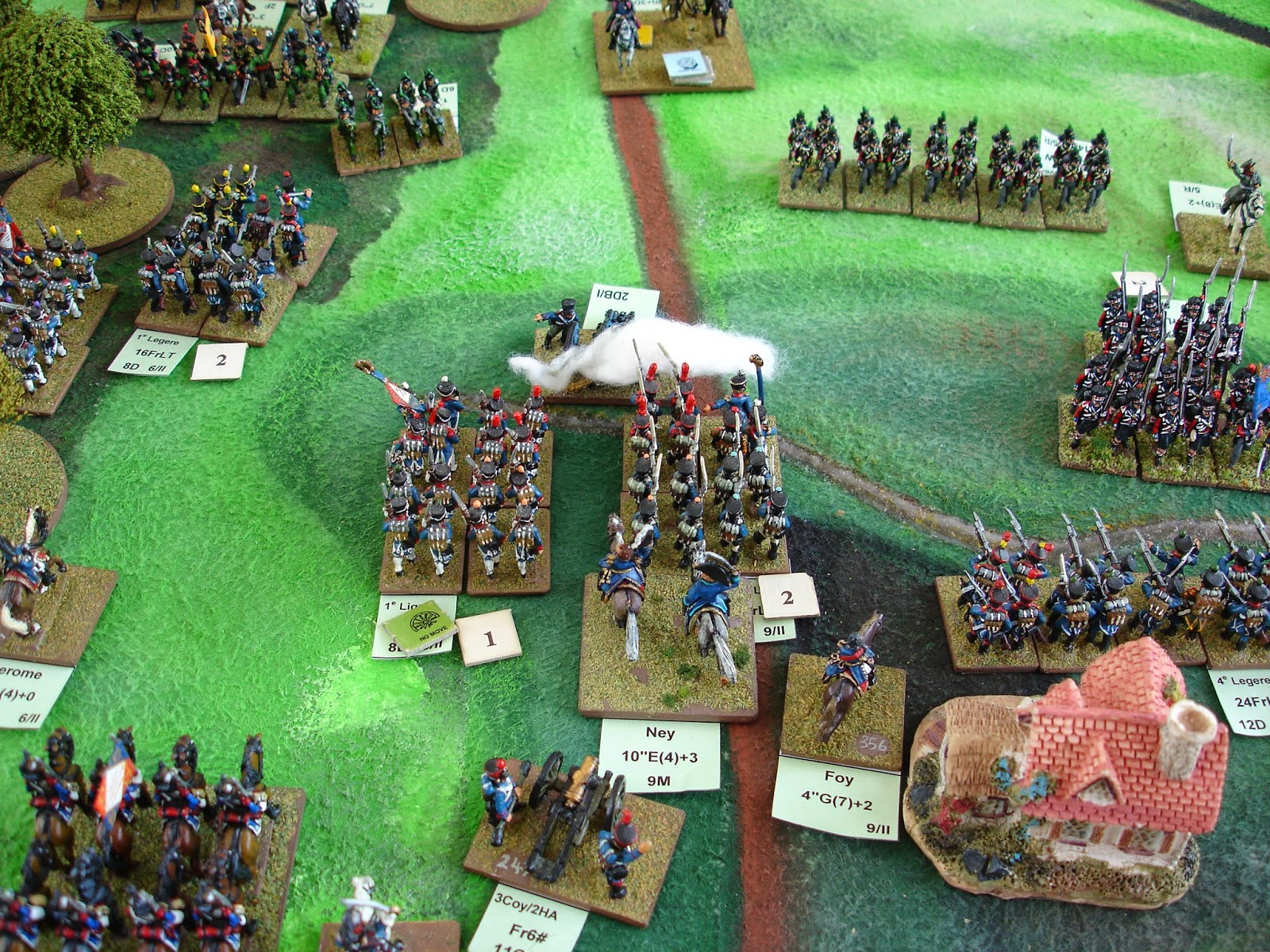 The going was slow and the Dutch-Belgian horse artillery decided to hold against Ney leading an attack by a brigade of the 9th Division. 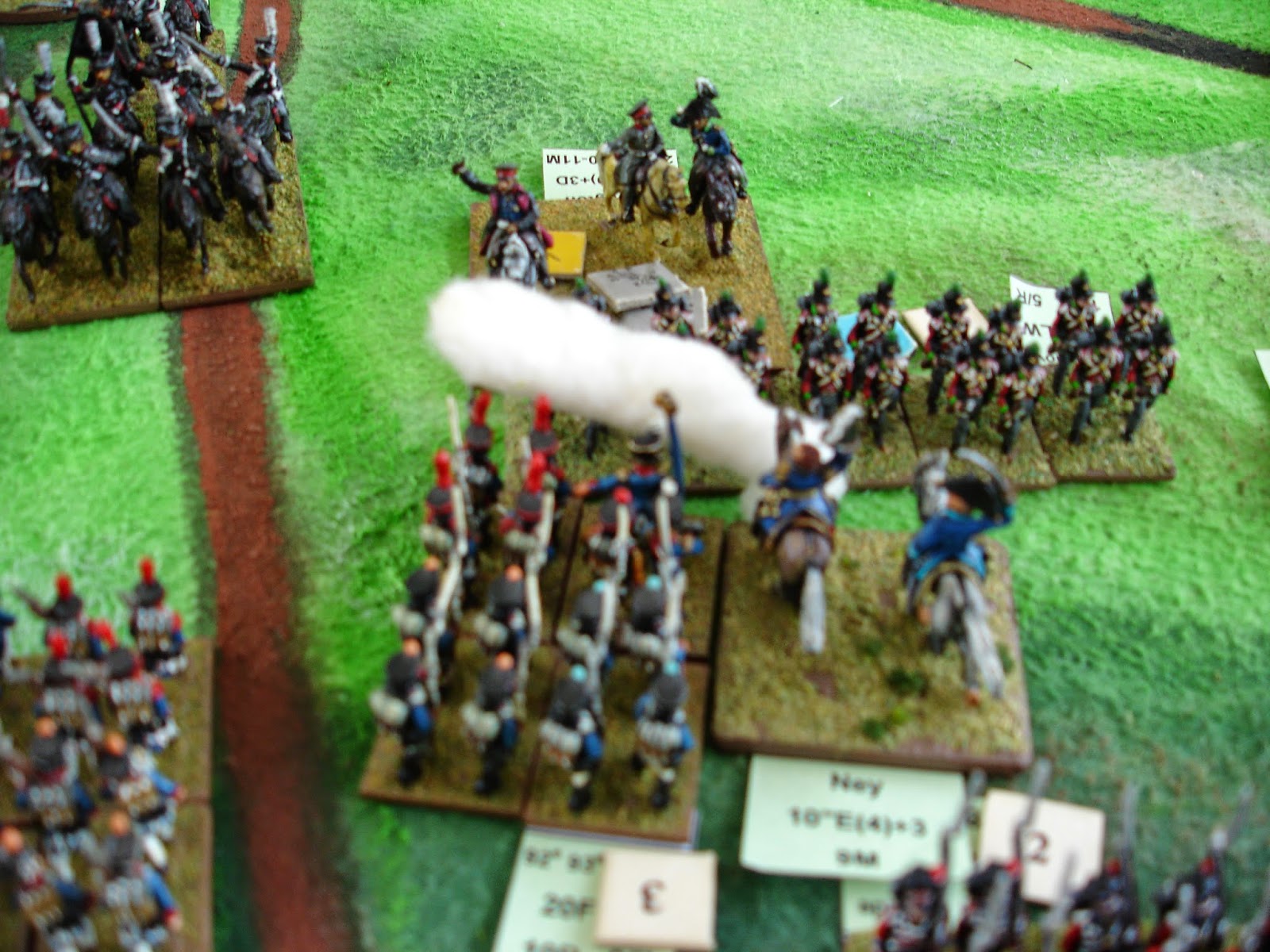 Ney continued to lead the brigade into the Hanoverian landwher brigade which Wellington rushed to support.  Ney pressed home the attack and the disordered Hanoverians were routed as they tried to withdraw. 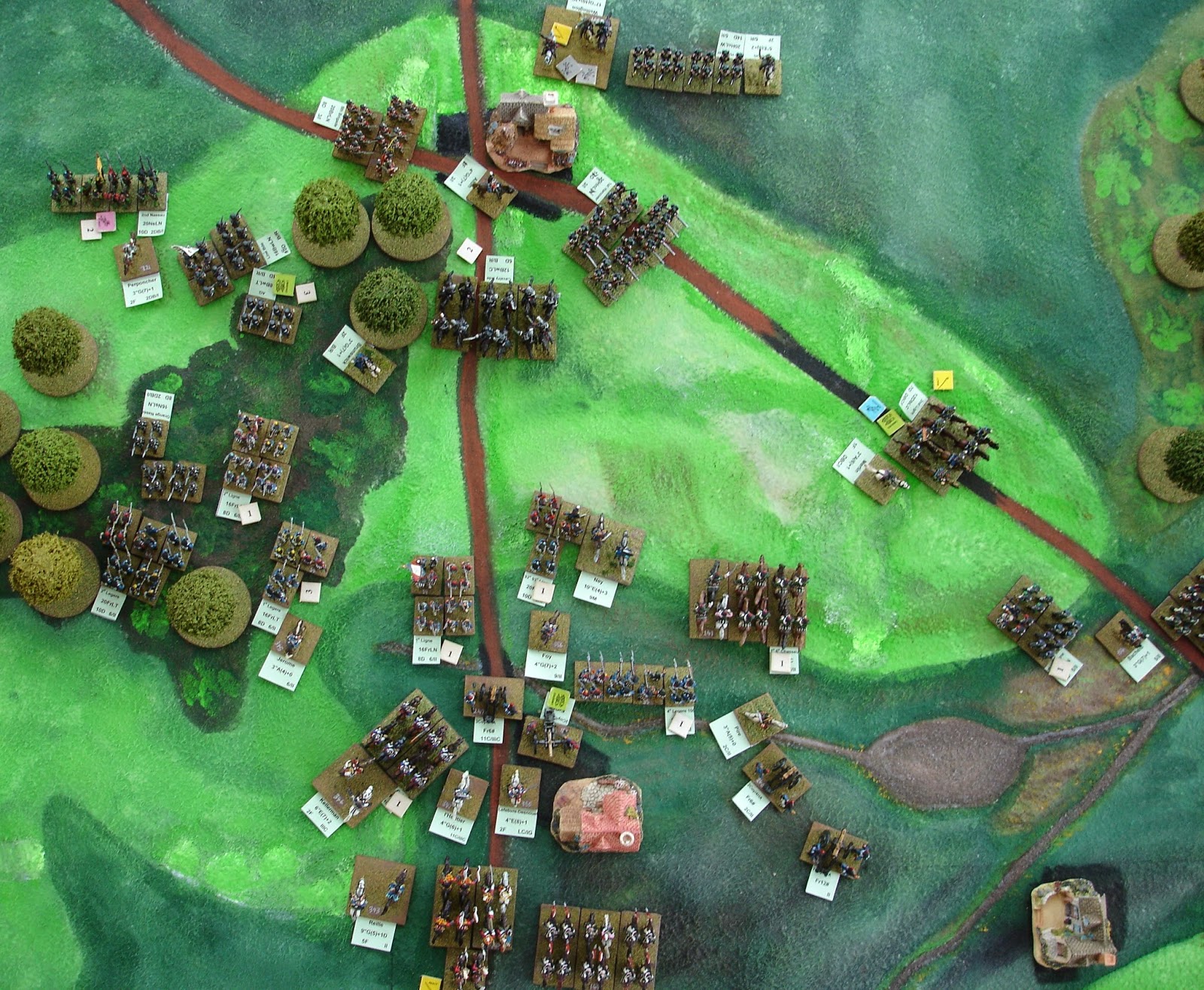 Jerome made slow but steady progress clearing the wood.  On the other flank Bachelu slowly started to cross the marsh and bring fire to bear on the Dutch-Belgian cavalry.  The Brunswick cavalry had made a charge in the centre which had held up the French advance.  The British 3rd Division has arrived and the 1st Division is due, but the French cavalry and infantry have started to claim the high ground.  Picton's Division and the Dutch-Belgians are fatigued.  It is the start of the Allied 17:30 turn, but we decided to call an end to play.

The size of the playing area makes it hard for the Allies to deploy, something that I've noted with the previous games.

I went back to having units attacking BUAs use their actual formation combat factor.

I plan to inflict the scenario on a few more players yet.